Looks like the same person bought both domains, according to Elliot Silver from domaininvesting.com.

These are some pretty huge sales, especially when considering it was most certainly a domain investor who bought them and not an end user. Perhaps I'm wrong, and we should learn more details soon, but if the same person bought both and it happened at ROTD, then I think it's very fair to assume it was a domain investor.

Bird.com has been sold for $2.5 million at today’s Right of the Dot live domain name auction. Fish.com was the next domain name up for auction, and that domain name was sold for $1.6 million. Based on the location information shown on the bidding page, the winning bidder appears to be the same for both of these auctions.

Bird.com and Fish.com have long been owned by TABcom LLC. Bird.com does not resolve to an active website at the moment, but Fish.com has a fully developed business operating on it. Interestingly, Carlo Tabibi, one of the principals of TABcom, was chatting on Clubhouse as these two auctions were concluding.

made me look these up.

Bird.ca is a big construction company

With all the talk about NFT sales and the crazy high prices digital tokens and art are going for, makes me think domain names are the original NFT assets.  Seem like the same thing, one of a kind and digital.

The day of the .ca is coming, when .com is so far out of reach the ccTLD's will go up big time.

Looks like the buyer of Tattoo is the same person who bought Fish and Bird. That's an expensive day for bidder "Internet 219", with a total 4.85M USD spent today. Maybe it's the DomainKing reinvesting some of that 3.6M he made on BestOdds...? lol 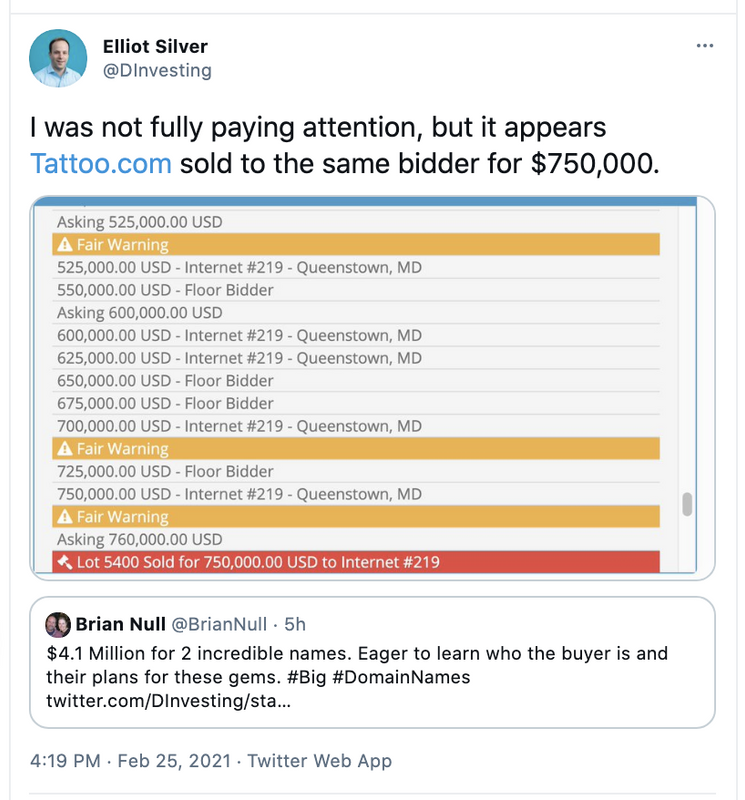 Maybe it's the DomainKing reinvesting some of that 3.6M he made on BestOdds...? lol

The buyer is from Maryland so that rules out Rick Schwartz

Haven't been on social media yet today, but yesterday the rumour was that it was probably Brent Oxley (founder of HostGator). He's been know to spend tons of cash and like to play in the top 1% of the market

The buyer is from Maryland so that rules out Rick Schwartz

Haven't been on social media yet today, but yesterday the rumour was that it was probably Brent Oxley (founder of HostGator). He's been know to spend tons of cash and like to play in the top 1% of the market

If you believe the location to be accurate, then you have to rule him out too, as he lives in Texas.

Thanks @FM, I didn't know that

Queenstown, Maryland seems to be a suburb of Baltimore. Any Baltimore domainers out there?

Or maybe it's a broker and these were clients thus multiple buyers?

Tattoo.com has already resold for "over 800K", says Monte Cahn. He also mentions the sale of names.com at 300K, and that other sales will be revealed soon enough:

Hello Freddie, We have a lot of good sales from the auctions logged but not reported yet as we are still pushing through it all. We had a big buyer who won multiple names in the live and online auctions who was hospitalized for Covid right after the extended auction. Fortunately he was released yesterday and is now home recovering. They are sending payment for a bunch of domains very soon. That was a bit scary for him.

we also completed the sale of names.com for $300k and will report that one shortly as well as some others sold in the after auction. We resold Tattoo.com for over $800,000 and about to close on Greece.com as well as several others. Many of the sales were batched from the live and extended auction as its more efficient to do single payments and send auth codes or transfers in batches rather than each name as it sells if there are multiple buyers and sellers for the names involved. So its been 12 days since the auctions ended, not 6 weeks as we start this process after the extended auction ends which was March 12.

A lawsuit has been filed against the "buyer" of Fish.com, Bird.com, and Tattoo.com after he didn't pay the 4.85 million USD he owed upon successfully winning the auctions. Looks like his backers bailed on him.

" The big buyer in February’s Right of the Dot domain name auction has failed to pay.

Right of the Dot and Bolten Properties (owner of the domains) have sued David Lizmi, who the Plaintiffs say is the deadbeat bidder. The lawsuit involves only Bird.com and Fish.com, the two domains that Bolten sold. Monte Cahn previously said that he sold Tattoo.com to another buyer.

In the lawsuit, the plaintiffs allege that Lizmi told him his “backers sidelined me after the auction and left me holding the bag.” It states that Right of the Dot owner Monte Cahn tried to help Lizmi set up financing and to work with his backers, but Lizmi eventually stopped responding.

Right of the Dot says its commission of the failed auction items was $1.2 million.

The case was filed in circuit court in Broward County, Florida on April 21. Howard Neu and Stevan Lieberman are representing the plaintiffs."

Looks like they need to screen their bidders better... I'm surprised there's not more trolls bidding up auctions and ghosting than there is.

Hehe.... maybe they can sublet the domains to Rick Schwartz and ask 120 million each.
If you ask me its a chance to greatly increase the sale price.


<sarcasm at its best>

They should see if the guy who bought the $69 million dollar NFT is interested in going in on it.

Bidder says he didn’t think he won the domains, and he shouldn’t have been allowed to bid more than $2,000 as he never completed the required certification.

Wow. @rlm already mentioned how they need to better screen their bidders, but the story gets a lot more complicated/interesting than that it seems..

Haven't read the actual court document yet but the respondent seems to be prepared to defend himself, plus has has a counterclaim again ROTD.

Yes, they need to actually enforce their own rules, so you could argue ROTD got taught a lesson.

But also, the bidder's entire defense is saying he shouldn't have been allowed to bid due to ROTD's poor/failed screening, so any of his foolish actions are null and void.  That's like a teenager who's old enough to know better, taking zero responsibility for stealing the parent's car, and instead blaming it on the parents for not hiding the car keys from him.  Unless this guy turns out to be a 12 y/o, I think he deserves to be taught a lesson too.

This will be an interesting case!