There has been some discussion on having CIRA disclose the CEO compensation (salary, benefits, severance package, etc.) CIRA members passed a motion at the Sep 2020 CIRA AGM for full disclosure. if interested and you agree, you can sign the petition https://chng.it/qhCsLgLf (just once please)

CIRA would have its members believe that they know best and act in the best interests of CIRA - as they must. You be the judge.
They talk about a multi stakeholder model, but can't name a single stakeholder that would object other than the CEO and the Board - of 12 or 15, take your pick.

CIRA members need to know if the Board they elected is doing its job. Disclose CEO compensation so that members can decide for themselves rather than have the Board self congratulate itself.

CIRA must be open and transparent. What are they hiding?

So let me ask a question Alex

At this point CIRA is a profitable company who has been tasked with keeping our domains safe and generally I would say that has been the case.

The discussion should be more like where are the profits going and what programs have been put into place to use the profits to their maximum potential.

CEO compensation has ALWAYS been a volatile subject where most corporations argue you get what you pay for and indeed sometimes you get a ceo that completely change the structure and profitability of a company. Microsoft comes to mind where Steve Ballmer was not the most proficient CEO but Sundar Pichai is probably worth every cent he gets. Sure one would look at his earnings and say no one person deserves that much money but when you see what he has actually done for the company the picture changes quite rapidly.

So my question would be more along the line of, has the CEO made positive changes, has the company flourished under his tenure? If the answer is yes then chances are he deserving of the compensation and the market decides what competent CEO's will earn. Remember one has to hire a new one if the old one steps aside so to entice talent one has to offer proper compensation thereof.
Visit me: MapleDots.ca - Follow me: @MapleDots
A

You make some very interesting points.

I am not saying that I alone decide what that compensation should be, just that members should know so they can make their own decision as to whether the Board is doing its job. Having been in IT for several decades, running a much bigger organisation than CIRA, with HQ in Ottawa, I have an idea, but it is not for me to decide.
• The Board Chair said that she had comparative studies but did not show those studies to the Board.
• She quoted that Mercer said the CEO compensation should not be disclosed but we don’t know what questions Mercer were asked, nor what their answers were. All we – members – know is what the Board Chair has said.
• Frankly I have heard stuff from CIRA, especially during the past month, that questions their truthfulness (personal opinion)

Do you know that 90% of the revenue comes from managing the registry and that the remainder comes from 6 or so products for a total of about $3 m in revenue? Those stats are for the CEO in his 14th year. Some members may say Wow, impressive? Others might have another opinion. While you may argue that the registry business of “.ca” is strictly not a monopoly, CIRA does have an exclusive license as long as it operates the resource on Canada’s behalf. Of course Google argues that it too does not have a monopoly as does Microsoft, Apple, etc.

The CIRA Board spends about $500k – salary and expenses - each year. I think that members should know that (and now they do) to determine if they are getting value.

All I am saying, given that CIRA is a Not For Profit, that its members should know.
A

Have you heard about the baseball player who found himself on 2nd base in extra innings, acting as though he had just hit a double and asking for applause from the crowd?
A

furthermore
According to research from the University of Cambridge a highly paid CEO actually hurts an organization. “A higher pay makes leaders believe they’re always right—that’s why they are paid so much. It unconsciously clouds their judgment. They become overconfident on their plans and ideas”.

Alex B said:
The CIRA Board spends about $500k – salary and expenses - each year.  I think that members should know that (and now they do) to determine if they are getting value.
Click to expand...

How many employees at Cira?
$500,000 isn't a lot especially when you divide it among a few employees.
*KISSED*
A

Honestly I thought it would be a lot more than 500K. If that truly is the number. Even if the CEO is making 200K a year that leaves 300k for the other 11. I can’t say that’s impressive….

Furthermore I know of one registered non profit and charity in Ontario (all their compensation is disclosed) and their revenue is 22M. Their compensation to 40 employees which includes their consulting fees is 6 million and CEO makes 200- 250K. So if I compare that with CIRA. I would say CIRA CEO making 200-250K is pretty reasonable. If that’s even the number. I can’t see it being that high as the other board members would be making peanuts.
A

There seems to be confusion (and I hope I am not causing it). Mixing apples and oranges (to coin a phrase)

The issue is that the CEO compensation is not disclosed. Members need to know. Some may be surprised.

Alex B said:
There seems to be confusion (and I hope I am not causing it). Mixing apples and oranges (to coin a phrase)

The issue is that the CEO compensation is not disclosed. Members need to know. Some may be surprised.
Click to expand...

I am trying to understand where you are going with this but what I think you’re trying to say is that the above is disclosed but the only missing aspect is the CEO compensation which is additional to the above info.
A

Correct. Only the Board and the CEO know his compensation - including salary, benefits and severance package.

In publicly listed companies (For Profit), shareholders must know the compensation of the CEO and NEO. The Board is accountable to shareholders who elect them.

Not For Profit companies don't have shareholders, they have members. The Board is accountable to its members who elect them.

That begs the question, what is the Board hiding and why.
A

I’m not sure how it works in the U.S. but ICANN is listed as a non profit corporation for charitable and public purposes. So, I’m not sure if California Law requires them to disclose that information?

If CIRA was a registered charity it would require them to show that information also.
A

There should be no doubt that CIRA has a public purpose and that it operates the registry, deriving 90% of its revenue, on behalf of Canada.

I really don’t know what it is but this was what I quickly found below. 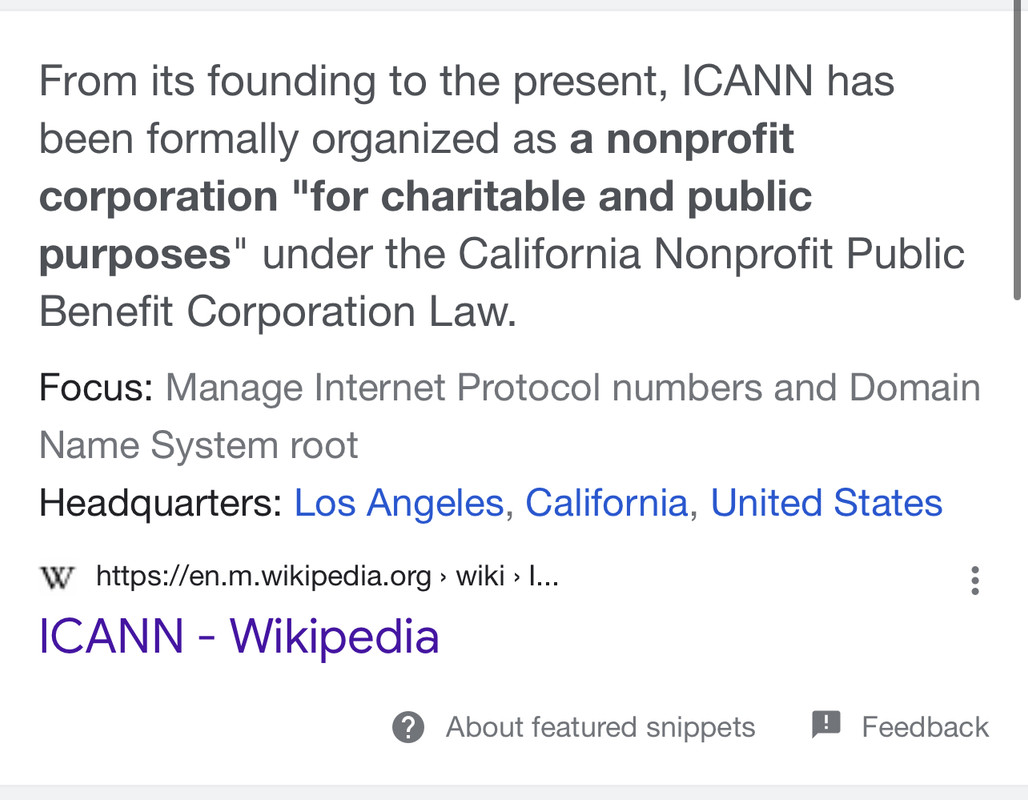 The word "requirement" has a fuzzy meaning.

In law there is a distinction between "must" and "should". In Canada, publicly listed companies must disclose CEO and NEO compensation, for reasons of transparency so that CEOs and other executives are not simply enriching themselves, while acting in self interest, using shareholders investment, etc. CIRA is bound by terms of its agreement with Canada - through ISED (the old Industry Canada) to be open, transparent and act in public interest, given that it has been given a "license" to operate the ".ca" domain on behalf of Canadians. Members also passed a resolution that the CEO compensation "must" be disclosed.

When acting in public interest do you want to follow the lest bar or the highest one?
A

ICANN (incorporated in California), is no more a charity than CIRA (incorporated in Canada and subject to CNPA), while each is subject to acts that each is incorporated under. In Canada, federally incorporated not for profit corporations – exempt from “tax” – have 3 sub categories: charity, soliciting and non soliciting corporation. In California, the applicable Act lumps public purpose and charity into one, recognising that any corporation does not have to do both, but to get a tax exemption must do at least one. In Canada, CRA recognises charities and monitors their activities.

Having reviewed ICANN’s financial disclosure, I could not find any charitable giving. I also want to draw your attention to https://www.icann.org/en/announceme...-fiscal-year-ending-30-june-2020-11-5-2021-en and the following statement
• The publication of ICANN's financial and tax information is part of ICANN's fundamental commitment to accountability and transparency. The community and the public are invited to review these tax returns and send any questions to planning@icann.org.

While CIRA does not look like a typical philanthropic organisation, when it gives out grants – over $9 million so far – is it advancing a social well-being agenda, acting in public interest (as per its mandate and letters patent)?

When CIRA states that it represents Canada internationally and is building a trusted internet what does CIRA look like to you? A commercial enterprise (For Profit and privately funded) or a corporation in the public interest, to better Canadians and funded by Canadians?

Having reviewed ICANN’s financial disclosure, I could not find any charitable giving. I also want to draw your attention to https://www.icann.org/en/announceme...-fiscal-year-ending-30-june-2020-11-5-2021-en and the following statement
• The publication of ICANN's financial and tax information is part of ICANN's fundamental commitment to accountability and transparency. The community and the public are invited to review these tax returns and send any questions to planning@icann.org.

ICANN publishes its compensation for all executives and even its tax returns. What is CIRA hiding?

It may be useful as a reference for everyone else here (I know Alex is already aware of this public document), but this is a public link to CIRA's compensation methodology for anyone that may be interested:

That link asserts that all compensation was done according to Hoyle and in effect that members don't need to know much else - unlike all public companies trading on public markets and other institutions such as ICANN (and a host of others that realize they work in the public interest). Of course you may find comfort that the Politburo knows what is best for its members and the public.

If you have been watching the skunk fight at Rogers play out, why is it that you can find out the CEO salary at Rogers, for example, but not at CIRA? CIRA, as you know, is funded by sales to members. CIRA must act in public interest. It must do so according to the "binder" letter, and also according to the Income Tax Act as a not for profit.

When I was on the Board I was told that comparables had been developed but I couldn't see them, nor the terms of reference for getting those comparables. The Board never saw them either - only select members may have. I still don't know who that select group was.

So what is CIRA hiding?
You must log in or register to reply here.
Members who read this topic: 0
Top Bottom