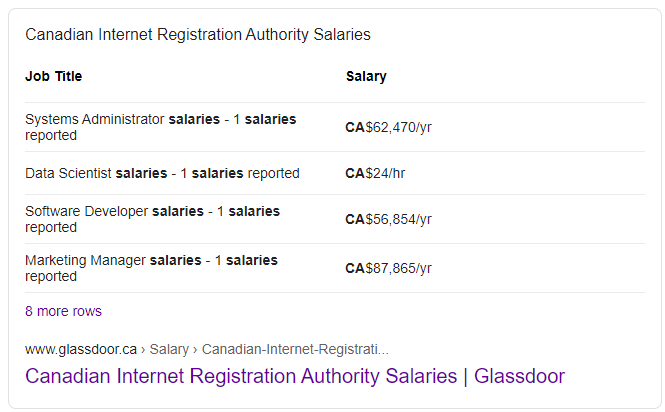 
The link above summarizes the salaries but I did not have the time to register, if anyone does please post the results and let's discuss of the salaries are fair, too low, or over the top.
Visit me: MapleDots.ca - Follow me: @MapleDots

They ask me to sign up for glassdoor to read more
Real character is doing the right thing when nobody is watching.
Be sure brain is engaged before putting keyboard in gear.
Sometimes I feel like I\'m in a battle of wits with unarmed opponents
Immortality is achieved by living a life worth remembering.

Yeah, that is why I did not go further.

Being not for profit I wanted to check to see if they had exorbitant salaries like some of the other non profits or charitable organizations.
Visit me: MapleDots.ca - Follow me: @MapleDots

The salaries listed above the ( 4 ) I would say are on the low side for sure.
D

i just love this excuse of why they refuse to divulge salaries on what is clearly a government non-profit:

CIRA gets no government funding, nor does it receive donations from either public or private sources. It is not a government agency nor crown corporation, nor is it a charity or publicly traded company.

What a crock, as the .CA registry is a valuable asset that the Government of Canada and Industry Canada, by their accord, expressly created the CIRA to administer, so to say they are not directly linked to the government is mincing legalese to hide from public disclosure. It's like some rich guy setting up a shell company to run his business, then saying "that's not me" when the CSA or CRA investigates and demands disclosure.

A simpler comparison would be for the Canadian government creating a non-profit corporation to sell off a vast sum of gold, then denying they are a government entity.

Then there is the issue of salaries + Bonuses

Not accusing CIRA of any of this because the salaries look quite reasonable but as a non profit representing Canada there should be some form of transparency here.
Visit me: MapleDots.ca - Follow me: @MapleDots

Show support for our community - Please consider linking back to dn.ca
D

MapleDots said:
but as a non profit representing Canada there should be some form of transparency here.
Click to expand...

I totally agree, but I guess taking the "shell corporation" route helps everyone remain anonymous while still sucking at the government teat.

Plus, the CIRA goes in great detail on exactly why they don't have to disclose salaries, so it's obviously been brought up as an issue in the past.

It seems entirely wrong, no doubt.
However, I'd guess that most crown and provincial corporations are more attrociously run than CIRA, siphoning off profits for unrelated pet projects and kickbacks. I'm not sure which would be worse.
You must log in or register to reply here.

Members who replied to this topic: 5