Second election in a row where the conservatives had way more votes and lost the election.

Technically 250,000 votes did not matter and Trudeau still got in.

Notice the NDP had over twice as many votes as the Bloc and still the Bloc has more seats.

Every time I look at the numbers it just does not make sense to me.
Visit me: MapleDots.ca - Follow me: @MapleDots

You can also chime in here

PS. I know that is our system, but it does not mean I have to like it.
Visit me: MapleDots.ca - Follow me: @MapleDots

I feel like if it was a popular vote that is more unfair. As you can see from the results the turnout was one of the lowest in the last 10 years. So if one location has many voters supporting in one direction it really can make a difference for the entire country if it’s a popular vote. For example in my area it’s not even close. There was like 10,000 more votes than the runner up. If it was a popular vote it almost makes those other areas that are close irrelevant.

For that reason I don’t mind the system that much.

Imagine how much work we could get done if the winning POPULAR vote got all the seats and was allowed to govern completely for what the public voted them in on.

Make the election every two years and hold the winning party responsible to their promises and without any further unnecessary debate we could actually get things done.

We could even give newer parties a chance on occasion because the term would only be 2 years.


So technically it would hold the party responsible to actually do what they were elected to do or be voted out in two years. We could even take it further and say that election promises have to be put on a time table and completed within the two years. Any hokey pokey and the next party gets in.


I know, it is hugely radical, and I am dreaming trying to think of something different, but the current system just seems broken somehow, especially with one province (quebec) having the power to so widely affect the national election results.
Visit me: MapleDots.ca - Follow me: @MapleDots

We don't do elections by popular votes, we do it by number of seats won. Liberals won, it sucks as a conservative, but we'll get over it.
Part of the problem is that Conservatives win certain ridings in a big way, and others not so much. Effects the percentages.

Agree about the Block Quebecois issue.

Not a fan of two-year terms, we will be in almost permanent election mode, and really not enough time to get programs planned, ececuted and measured. I'm more in favour of term-limits.

It also wouldn't hurt if we had REAL ethics enforcement of MP's.

It certainly doesn't help that 80% of the media is left-leaning...not as bad as the US, but bad enough.

The Conservatives have got to learn how to make policies that resonate with the electorate. They aren't doing it well for the last 3 elections.

At the end day, not much will change for me...
Candy is childhood, the best and bright moments you wish could have lasted forever. - Dylan Lauren

Unfortunately this time around, I don’t think it mattered who got in. The “Conservative” isn’t really a conservative. I see him as a wolf in sheep’s clothing. I personally voted conservative because I would do anything just to get the drama teacher out.

On a side note, it’s interesting to see the PPC party get over 800,000 votes yet not a single seat. 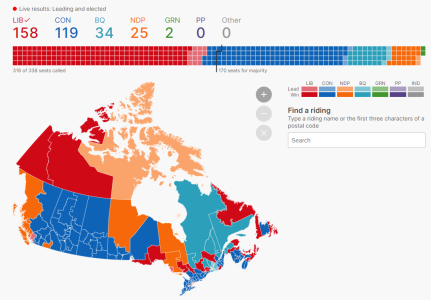 But it's always Ontario that puts the Liberals in the lead
Visit me: MapleDots.ca - Follow me: @MapleDots

What might also be nice is is to have an online voting system so citizens can vote on individual issues - and not have to vote for a particular party. Parties each have their good and bad points, so it sucks to vote for a party when you may only agree with a fraction of their platform.

rlm said:
What might also be nice is is to have an online voting system so citizens can vote on individual issues - and not have to vote for a particular party. Parties each have their good and bad points, so it sucks to vote for a party when you may only agree with a fraction of their platform.
Click to expand...

Yes, imagine online, being able to vote for a regional candidate because they have the same vision as you and yet a different federal leader if his vision does not align.

Right now I feel that even if I like my regional representative I have to vote for a different one because of the leader.