Don't be Fooled by Domain Registry of Canada Scam 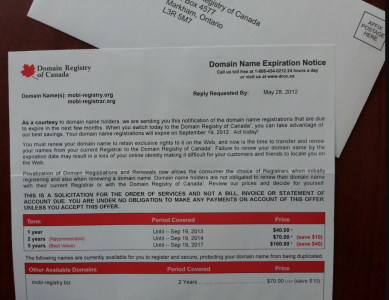 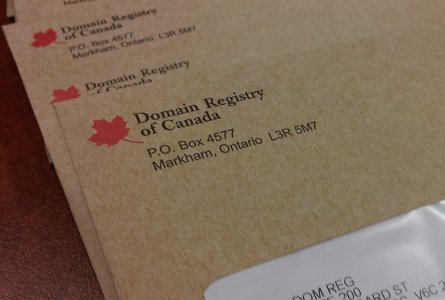 Domain Registry of Canada Scam Envelope be on the lookout for their deceptive letters. If you are a domain owner, chances are you have already received one or more of these. At some point, Domain Registry of Canada will send you one if you own a domain. The letters are sent in a brown windowed envelope similar to official government type letters. The company uses an official Canada Post branded postage stamp. The letter itself is designed to appear like an invoice and urges the domain owner to renew their domain immediately, as though failure to comply will cause you to loose your domain.

How do they do it? To get your mailing address, DROC extracts the details of your domain name registration record from the publicly available whois database. This practice, known as 'whois data mining', is directly against the terms of use of the whois service. The whois information contains the mailing address of the domain name owner. Once they have the information, they simply send the deceptive letter and wait for the domain owner to take the bait. Their goal is to trick anyone who owns a domain into transferring that domain to DROC. They ask you to send your payment information and email address in the enclosed envelope.

The company has received numerous complaints from customers who were fooled into sending their money. The company director was fined and placed under probation by the Competition Bureau in Canada and they were also fined by the FTC in the US. Canada's actual .CA Registry called the Canadian Internet Registration Authority (CIRA) removed DROC's certification. In fact the abuse by Domain Registry of Canada was one of the reason's CIRA changed its whois service.

Haven't received any of those in a while. Is this from DomainPeople? I'd like to add a link to the source (https://www.domainpeople.com/alerts/domain-registry-of-canada-scam.html).

Sorry yes, I didn't want to post the article because the picture was upside down, I shoulda posted the source. :'(

I get the occasional email version of that scam still. But I haven't seen a snail mail letter in many years. Maybe they eventually realized that domainers weren't that stupid and it was a waste of money trying.

I hate those losers.
My Market Page dn.ca/market/domains
D

rlm said:
I get the occasional email version of that scam still. But I haven't seen a snail mail letter in many years. Maybe they eventually realized that domainers weren't that stupid and it was a waste of money trying.
Click to expand...

That, and spike in postal rates.

Can you imagine the hit rate scammers would need to pay for CP?

What about that a-hole that keeps trying to sell me some .net shit he just registered? Anyone else get those, relentlessly, despite saying to stop??

Yes most of those unsolicited offers are crap, like if you own animalhabitat.ca, they email to offer you animalshabitat.net, or the words are rearranged like from creditreports to reportscredit.

But I have had the odd offer like that and it was offering the exact match .com to the .ca I already had. Usually they only ask for a few hundred dollars, but if you hum and haw and eventually offer $100 or $150 US they usually go for it. At that price the risk is worth it, usually can pay through their site through paypal. I forget the company name they use.

With more whois default protection now, I get less of those emails, but the more domains you have the more I'm sure you get.

What annoys me most are the phone calls supposedly from different cities in US or Canada, but really from India, offering all kinds of web services. Sometimes I get multiple of those in a day.


rlm said:
What about that a-hole that keeps trying to sell me some .net shit he just registered? Anyone else get those, relentlessly, despite saying to stop??
Click to expand...

Funny how a 10 million dollar lawsuit against cira allows tricksters like this back online.
Visit me: MapleDots.ca - Follow me: @MapleDots 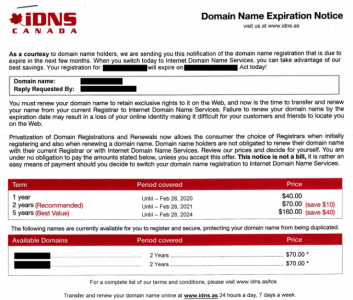 Changing ones name helps too...

Beware of offers to renew your corporate domain name by IDNS Canada
Visit me: MapleDots.ca - Follow me: @MapleDots

I got 1 of these letter last week. Used to get a lot when all domains had no privacy.
DomainRetail.com

I can't believe that is still going on.
Would be interesting to know how that $10M lawsuit panned out for them....

I occasionally receive their letters too....they go straight into the trashcan.
George Kirikos - (416) 588-0269
Follow me on Twitter: @GeorgeKirikos

rlm said:
I can't believe that is still going on.
Would be interesting to know how that $10M lawsuit panned out for them....
Click to expand...

I haven't dug too deep or read that carefully but this link below (i.e., "order regarding costs") suggests that DROC lost and was forced to pay CIRA $6,394.83 in legal costs + disbursements: 2011 CACT 24 (CanLII) | Brandon Gray Internet Services - Order regarding costs | CanLII

And there's this link below, if you want to learn about the reasons DROC lost:

2011 CACT 1 (CanLII) | Brandon Gray Internet Services - Reasons for Order and Order dismissing an application for leave under section 103.1 of the Competition Act | CanLII