Epik can't pay any of its users right now (1 Viewing)

I’ve done business with Luigi on many occasions over the years and he’s a real straight shooter. I hope he doesn’t get shafted here.
Real character is doing the right thing when nobody is watching.
Be sure brain is engaged before putting keyboard in gear.
Sometimes I feel like I\'m in a battle of wits with unarmed opponents
Immortality is achieved by living a life worth remembering.

Imagine if they tried to balance their books by gambling in crypto just before the FTX meltdown? Yikes. I got a feeling this will only get uglier before it gets any better.

They owe me three thousand and told me to use it up as a credit for services. Yeah right, like that's gonna happen

RedRider said:
They owe me three thousand and told me to use it up as a credit for services. Yeah right, like that's gonna happen
Click to expand...

If I were you, that's what I'd do. Transfer in some domains you plan to hold long term, renew them for 8 years, then transfer them back out asap. At least you get something out of it that way.

@RedRider, I hate to agree with @rlm on this because it’s still a shitty situation for you, but if theres a chance they will go belly up then you might want to use that money towards renewals in case it’s no longer an option in the future and your money is gone for good. And perhaps even buy domains on nameliquidate if you see things you like. I’ve read that others are doing this, or considering it at least.
Last edited: Nov 26, 2022

It was a sale, I don't have anything registered at epik. I would have to transfer in at a cost, then transfer out again. Just give me my money and be done with it. Fucking masterbucks are the biggest scam ever!!

RedRider said:
It was a sale, I don't have anything registered at epik. I would have to transfer in at a cost, then transfer out again. Just give me my money and be done with it. Fucking masterbucks are the biggest scam ever!!
Click to expand...

So you can’t use masterbucks to initiate a transfer in? I would have assumed that masterbucks are like in-house credit, and could be used for renewals or transfers in, no? What can you use them for then?

rlm said:
So you can’t use masterbucks to initiate a transfer in? I would have assumed that masterbucks are like in-house credit, and could be used for renewals or transfers in, no? What can you use them for then?
Click to expand...

I believe masterbucks can be used for anything they offer, including transfers and renewals. Never heard otherwise anyway.
Last edited: Wednesday at 1:12 PM

MapleDots said:
I have dozens of emails from people (even members here who have never posted) that asked me to take their masterbucks in exchange for a discount. Some of the amounts were pretty staggering and now I know why. I think the writing has been on the wall for mastebucks quite a while now.

I started cautioning and posting about it back in Jan 2021


See the topic in Hushed Topics
https://dn.ca/topic/epik-master-bucks-email-legit-or-scam.391/
Click to expand...

I have also received many messages from people to take over their masterbucks to purchase domains. Either it has always been difficult to get rid of them or people had an inkling this was going to happen.

RedRider said:
It was a sale, I don't have anything registered at epik. I would have to transfer in at a cost, then transfer out again. Just give me my money and be done with it. Fucking masterbucks are the biggest scam ever!!
Click to expand...

I understand your frustration but you wouldn't exactly be transferring-in "at a cost" (or not at a loss anyway) since the transfer price comes with a 1-year renewal... So you get something out of it at least, which is what @rlm is saying.

I'm sure you knew that about transfer fees but thought it was worth pointing out just in case... and maybe their renewal fees are twice that than other registrars so it's still a bad deal. Not sure about that, but while transferring-in you could also maybe save by paying for ~8 years of registration, like RLM said (and then later transfer them out again, if you want to get out).

In any event, it's up to you but the main point we're trying to get across is that it seems possible is they could go bankrupt and you wont get squat once they file for it. My biggest issue or consideration would be whether i actually want to transfer my valuable domains there with everything that's happening. I doubt there's much risk because the domains would be moved to another registrar if they go bankrupt and cease to exist, but your money won't and will vanish. It may be a bit of hassle but probably better than losing all your money.
Last edited: Wednesday at 1:13 PM

Esdiel said:
I doubt there's much risk because the domains would be moved to another registrar if they go bankrupt and cease to exist, but your money won't and will vanish. It may be a bit of hassle but probably better than losing all your money.
Click to expand...

I'd say test it out, transfer in one domain, do the renewals, immediately get the auth code and transfer it out. If that works, transfer more in and do the renewals, immediately get the auth code. You may not need to immediately transfer it out though, in theory that auth code should allow you to transfer the domain out any time regardless of what the registrar tries to do to you. Of course make sure your registrant details are correct, and if there are any problems, I'm sure CIRA would support you getting your domains safely transferred out if there were any problems with epik. But of course if you have the cash, go ahead and transfer them right out.

Epik's CIRA account has to have funds on account with CIRA. CIRA will not register/transfer/renew domains on credit, so each registrar has to have a positive balance at CIRA in order to do business. As soon as their positive balance goes to zero, then you may never get anything out of it because I'm assuming that if they cant afford to pay you cash, they can't afford to pay CIRA cash either.

Of course their renewal costs are a factor, but even at a bad renewal rate, I suppose getting something out of them is better than nothing. This may also be part of their strategy - get you to cash in your masterbucks at a loss, and they keep the difference as a profit (or at least as a way to mitigate their existing losses).

Hold tight, keep emailing them, the small fry guys are getting paid out, you need to keep hounding them. The bigger debts are probably a write off until the class action lawsuit arrives.

Epik continues to dig out from financial mess​

Andrew Allemann1 CommentDecember 1, 2022
But creditors aren’t happy with the pace as they are still owed money.

Domain name registrar Epik continues to dig itself out of a financial hole, but new problems continue to pop up.
The registrar offers a type of store credit called Masterbucks along with an in-house escrow service. Epik was using money from both of these to fund its operations rather than keeping the funds in separate bank accounts. The company also didn’t have an escrow license.
It wasn’t apparent that the money was being used to fund operations (or otherwise unavailable) until customers became spooked that they wouldn’t be able to get their money back. That created what amounted to a run on the bank — and Epik didn’t have the funds to pay back all of its customers.
Epik brought in new management in September that is chipping away at these debts, but it doesn’t have the cash on hand to fund operations and make everyone whole today. It’s in triage mode, taking any new profits that come in and paying them out as available.
Recently, the company sent an email to some customers stating:

When new management took over Masterbucks, the balance was approximately 4.5 million dollars. Through our dedicated and expeditious efforts, the new management team has brought that number down to just over $800k and change.
Click to expand...

But last week, a representative of domain seller DomainEmpire posted a review on TrustPilot saying it has a balance of $1.5 million in Masterbucks that it has not been able to withdraw. It accrued this money from domain sales, it stated.
According to DomainEmpire, former Epik CEO Rob Monster offered it 6% annual interest if it kept its money in Masterbucks.
I asked new CEO Brian Royce yesterday via email about DomainEmpire’s $1.5 million debt. He said the number was news to him. He also said that the $800k quoted in the email was no longer correct even without the DomainEmpire number, because he just became aware of another debt of over $300,000 that wasn’t in Masterbucks, bringing the total (without DomainEmpire) to $1.1 million.
It seems that there is no clear record-keeping for the new management, which adds to the challenge.
More details about the blowup at Epik this year are starting to trickle out. A former contract EVP of Operations for Epik sued the company this year, saying he has not been paid. The case was settled. In a court filing (pdf), an attorney for Epik wrote:

While working for Epik, the Plaintiff began working with one of Epik’s chief customers–JJE. JJE offered and invested into a plan for ownership in Epik. Within a few months, however, JJE changed its position and asked Epik if JJE could divest from their investment in Epik. As an agreement and negotiations between Epik and JJE progressed, JJE broke off from their original offer to Epik and negotiated for a settlement.
Click to expand...

Monster had previously said the company received a $32 million investment. That investment didn’t fully come to fruition.
Click to expand... 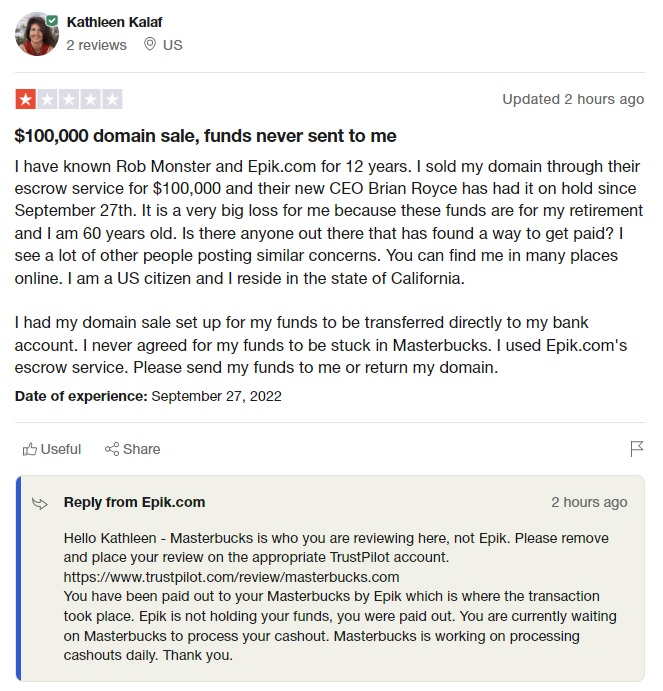 They're shitting us right? Masterbucks is epik, they're trying to make it sound like they're two separate companies.
That's epik trying to pass the buck to masterbucks!!

Crooks…no other word to describe them.

They're removed any reference to Masterbucks from Epik.com website.
DomainRetail.com

They've also stripped most references of Epik on DNForum

I think they've learned their lesson but also this whole federated identity gives me the willies, be sooooo careful using the same login credentials on many sites.

We know the track record...
Visit me: MapleDots.ca - Follow me: @MapleDots

Post a couple of paragraphs and then a link back.
We don't want to take all content of another site without giving credit back.

Former employee of Epik posted yesterday she wasn't paid her wage and the funds from Masterbucks was withdrawn without her knowledge.

At this point, all those affected should consider legal route to get what they're owed.
DomainRetail.com
You must log in or register to reply here.