Some heavyweights in the domain community are having somewhat of a heated debate on Twitter today.

If you dig in the comments you'll see they get into a number of things: 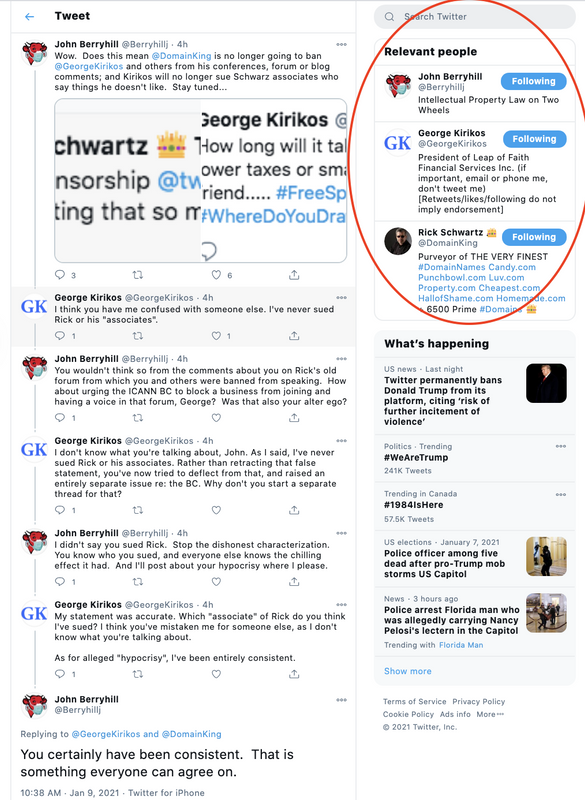 DN.ca Member [notify]GeorgeK[/notify] just launched FreeSpeech.com not too long ago and it explains some of what is happening there.

Actually, FreeSpeech.com was launched in early 2019, not recently. [back when I was banned from ICANN working group's for calling out a lawyer who was on the losing side of a UDRP]

Today's debate was ultimately about censorship and free speech, i.e. the whole debate brought on by Twitter's decision to permanently ban Donald Trump.

As for Berryhill's initial tweet, I have absolutely no idea what he's talking about in regards to some alleged lawsuit against Rick Schwartz's associates. That was bizarre! Even Rick (who I emailed today) had no idea what Berryhill is talking about, and when pressed, Berryhill couldn't identify such a lawsuit.
George Kirikos - (416) 588-0269
Follow me on Twitter: @GeorgeKirikos

In order to put the issue to rest, I challenged Berryhill to produce the evidence of the lawsuit tonight, with me being a plaintifff against one of Rick Schwartz's associates:

Of course, that lawsuit doesn't actually exist, so my money is safe. But, now the burden has shifted to Berryhill to provide evidence of that lawsuit or back off from his statement.
George Kirikos - (416) 588-0269
Follow me on Twitter: @GeorgeKirikos

So strange John B is usually such a stickler for details.

For anyone who does not know, this will give you some details on John Berryhill

Indeed, he must be suffering from Trump Derangement Syndrome or something! O

If anyone actually *believes* I sued one of Rick's associates, then ask Berryhill to produce the evidence (court records are public), and both ICA and EFF will be $100,000 richer! What happens if Berryhill *can't* produce that evidence? A lawyer shown to be making recklessly false statements of that nature? I leave it to you to decide how you would treat such a lawyer.

I'm guessing Berryhill is going to be walking back on that statement - and I hope he outright retracts it, apologizes and then explains himself. I wonder what it was though that convinced him to say it in the first place, it really is weird. I don't follow what's going on with ICANN, so I don't have any insight into that, but as far as I knew, both George and John have always had stellar reputations within the domain industry unless something has changed over the last decade that I haven't heard about. Apparently either John confused George with someone else (which I would find doubtful), or someone he represents made the false claim and then Berryhill repeated it with out verifying the information first.

Hmm, he is usually so vocal and eager to defend his statements.

Maybe he realizes it was an error and is hoping the topic will fade away.
Visit me: MapleDots.ca - Follow me: @MapleDots

Berryhill was on Twitter today, but ignored the situation, instead focusing on his bike ride. Hmmmmm.
Click to expand...

The whole situation is quite strange, especially coming from Berryhill.

At first I thought he was just trolling both you and Rick in a friendly/teasing way, but then things got surprisingly ugly. I was somewhat shocked because I always thought highly of both him and yourself.

Berryhill should really explain himself to you, whether it's privately or publicly... but maybe he can't since what he's referring to is protected by solicitor-client privilege? I don't know... but it crossed my mind. If it is privileged information, he probably shouldn't be alluding to it either.

Esdiel said:
Berryhill should really explain himself to you, whether it's privately or publicly... but maybe he can't since what he's referring to is protected by solicitor-client privilege? I don't know... just a wild guess, but it crossed my mind. If it is privileged information, he probably shouldn't be alluding to it either.
Click to expand...

Solicitor-client privilege isn't a factor. Court cases are public information. I've posted many of them in the past, e.g.

as have most other domain industry news sites over the years. If such a case filed by me against one of Rick Schwartz's associates actually existed, as Berryhill asserts, then he can tell the world (a) which court was the case filed in, (b) which date (c) name(s) of the defendant(s), (d) case number. He can even provide a copy of the statement of claim.

Put yourself in my shoes --- imagine he was making a false statement about you? It's time for him to put up, or shut up.

BTW, I made a poll on Twitter, and so far (still a couple of days left), 24 people have voted:

and of those 24, 66.7% think that Berryhill should have to donate the full $100,000 EACH to EFF and the ICA, should he fail to produce the proof of the alleged lawsuit filed by me against one of Rick's associates. Feel free to participate in the poll, if you've not already done so.
George Kirikos - (416) 588-0269
Follow me on Twitter: @GeorgeKirikos

Just to follow up, Rick Schwartz himself publicly confirmed that I never sued him, and he has no knowledge of me suing any of his associates, see:

GeorgeK said:
Just to follow up, Rick Schwartz himself publicly confirmed that I never sued him
Click to expand...

That puts you half way home, all John has to do is to say he made a mistake and you are in the clear.

John Berryhill has responded to me via email and asked me to post a statement for him...

I am preparing his email for posting.... hang tight everyone.
Visit me: MapleDots.ca - Follow me: @MapleDots

MapleDots said:
John Berryhill has responded to me via email and asked me to post a statement for him...

I am preparing his email for posting.... hang tight everyone.
Click to expand...

Real character is doing the right thing when nobody is watching.
Be sure brain is engaged before putting keyboard in gear.
Sometimes I feel like I\'m in a battle of wits with unarmed opponents
Immortality is achieved by living a life worth remembering.

John Berryhill said:
Some years ago, George Kirikos sued a number of people for defamation.
I recall having first heard of it on Rick's now long-defunct board, and
I had gotten the impression, due to the general opinion of George among
the members of that board, that his suit involved members of that board.

Apparently, I was mistaken about George's defamation suit. He has a
page memorializing it, and includes links to the similarly-worded
heartfelt apologies of a number of people who, it was alleged, said bad
things about George on IRC.

In the course of a discussion of the internet and speech issues, I made
reference to that suit which George pursued. However, I had conflated
where I recall having heard of it with who the targets of his suit
were. To be honest, I don't spend a lot of my time keeping track of
significant events in George's life. I don't know his age, what he
looks like, the name of his spouse and or children, if any, and so on.
I certainly didn't keep track of who he sued for saying bad things about
him.

However, for my convenience, this page: http://kirikos.com/legal/
should certainly be consulted by anyone having an interest in various
and important legal matters in which George has been involved, including
99-CV182688CM, George Kirikos (Plaintiff) v. Craig Nicks, Stacey Levin,
Eduardo Catucci, Christopher Morrison, Spring Rhey Munsel, Jared
Proudfoot, Paul Everingham and Steve Goegoes (Defendants).

In the extremely unlikely event I ever have anything to say to George in
an informal discussion online or otherwise, I will of course be sure to
conduct comprehensive research.

I'm not sure what to make of that. It was an acknowledgement of John "conflating" separate incidents and parties in his statements, but stopped well short of apologizing for anything.

My guess is that George's dogged ability to uncover hidden facts has at some point annoyed John over the years. Then during a more recent conversation regarding the internet and free speech, John felt the need to take a shot at George based on his conflated memories.

I've known who both of these guys are for more than 15 years, so over that many years, my memory isn't perfect either. I could have certainly conflated some facts over time as well. However, the more telling thing is the fact that John must have some ire for George, otherwise I doubt he would go out of his way to make that shot in the first place. And since John's response lacked any sort of apology, he obviously didn't like getting called out for his inaccurate statement either.

(the automatic notification emails don't seem to be going out, as I didn't get a notice of new posts --- just happened to check in now to see the new posts, otherwise I'd have responded earlier)

Exactly, rlm.....it's his typical lawyer speak, hoping this goes away, and not a sincere attempt to set things right. But, folks can judge for themselves, and feel free to contact me directly (my phone number is in my signature) if they had any questions/concerns, etc.

GeorgeK said:
the automatic notification emails don't seem to be going out, as I didn't get a notice of new posts
Click to expand...

I also tagged you which would have sent an email

Mine are coming in, here is another tag [notify]GeorgeK[/notify] (did you get that email)

Also check your spam
Visit me: MapleDots.ca - Follow me: @MapleDots

I already show up as "subscribed". The email notice I got had a subject of "Mentioned in.....". So, could be some issue when posts don't mention me. [and I have "Stay subscribed to this topic" checked above the "Submit" button, too]
George Kirikos - (416) 588-0269
Follow me on Twitter: @GeorgeKirikos
You must log in or register to reply here.

Namepros may finally have met their match