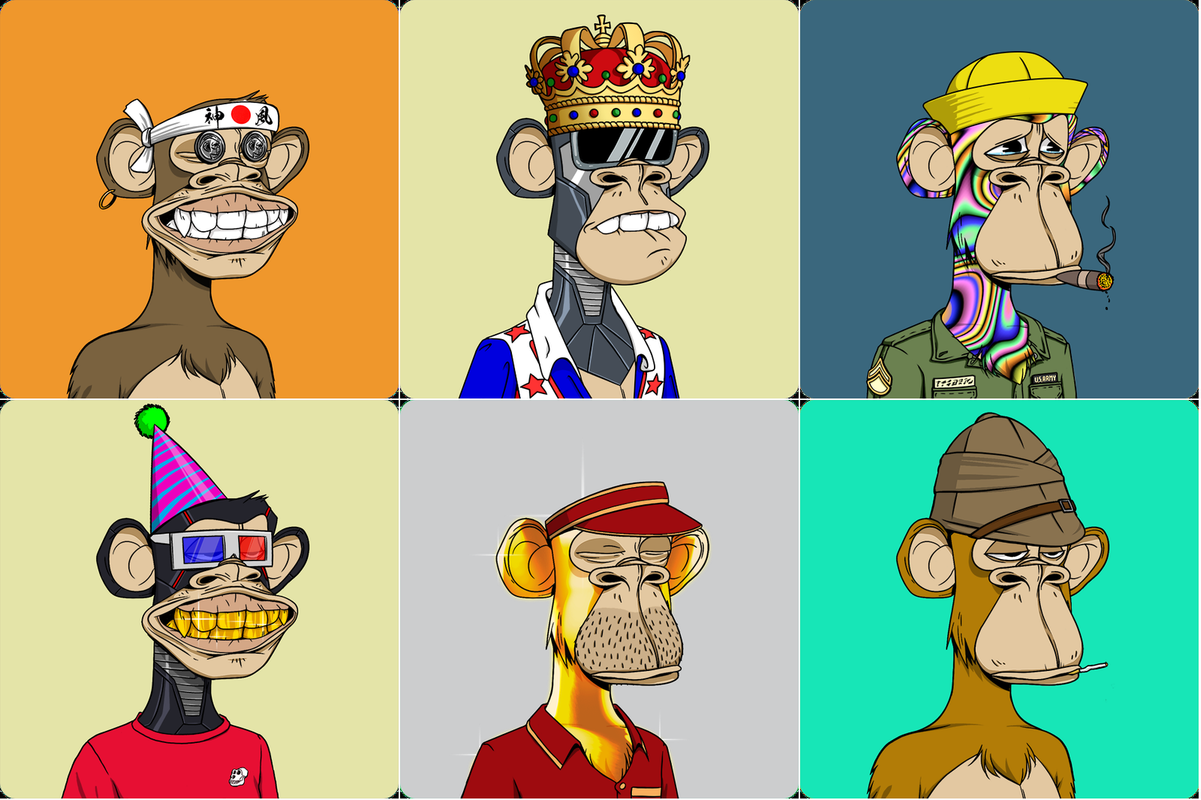 A few thoughts on finding a good investment-grade bored ape
Morgan Linton is a guy I have followed and respected for a number of years and he has recently started dabbling in NFT's which I cannot fully wrap my head around. Currently he is buying and selling BORED APES and I keep wondering what happens to the last guys money when nobody buys it from him after spending 100k on it.

When I bought my first ape the week the project launched I didn’t think much about traits and rarity, instead I was focused on something that would make an awesome profile picture. Then, as time went on and I continued to buy more apes, I started to spend a lot more time looking at traits, and rarity, and really started to pay attention to trends, which change quite a bit over time.
Click to expand...

Here is the article by Morgan:
https://morganlinton.com/a-few-thoughts-on-finding-a-good-investment-grade-bored-ape


Make sure to read the whole article and then comment I left because it does open things up for discussion.

We definitely want to avoid this situation right?
Visit me: MapleDots.ca - Follow me: @MapleDots

And then the craziness starts...


Nearly a week ago, I published an article about a domain investor spending more than $500,000 USD worth of ETH on a Bored Ape Yacht Club (BAYC) ape NFT. This afternoon, Andy Booth announced that he and his brother, James Booth, paid 400 ETH for a different BAYC NFT. This one is golden with red laser eyes and a boat captain’s hat.
Click to expand...

I don't get it, therefore I can't invest in it. Could be my loss... time will only tell.

I would prefer a Ferrari F40 at that price because I would know each passing year it'll only be desired more and could be a $10~ million car when it's the last of its breed. 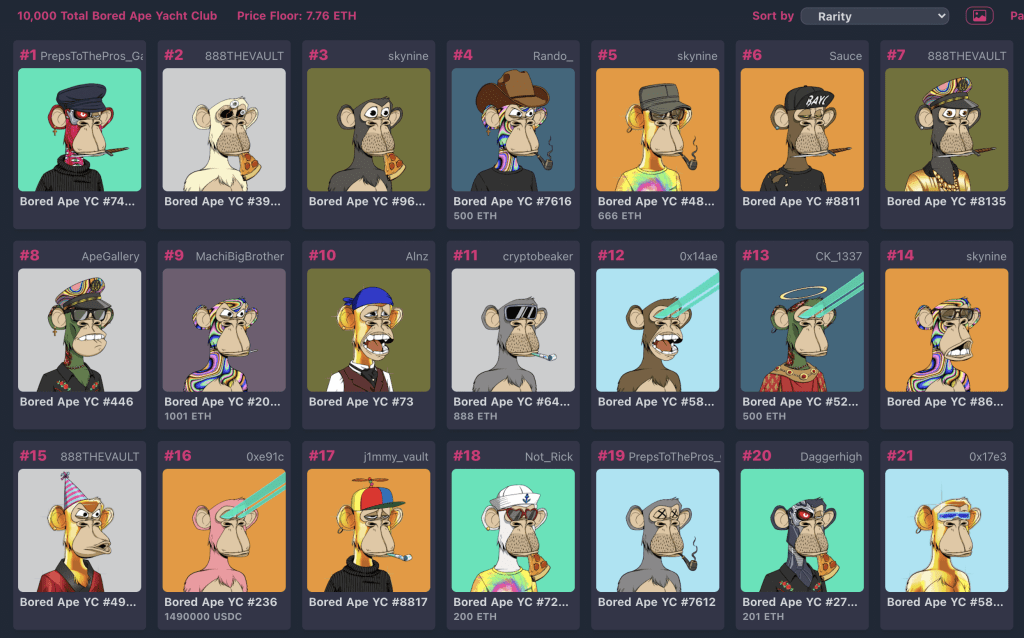 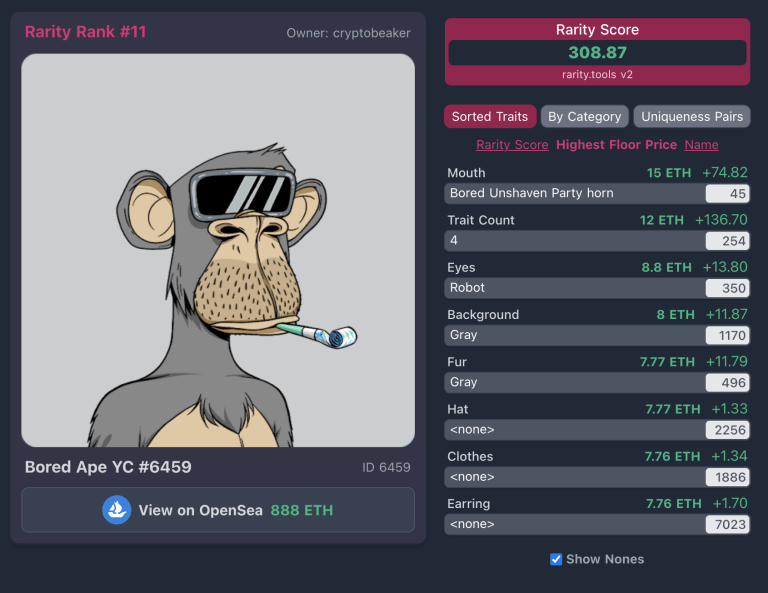 Okay, so looking at the image above you’ll see the rarity rank in the top left, this means you’re looking at the 11th most-rare ape. To the right of that you’ll see the rarity score which is 308.87, the higher the number, the more rare the NFT. Below that, well, this is the good stuff and what you’ll want to study and learn how to identify if you want to really dive into the Bored Ape or NFT world in general.
Click to expand...

Seriously, I am going on record that the last person holding the bag on these is going to be out a whole lot of money.

So you paid 2 million for an ape, there are no buyers wanting it, what is it worth?

An even better question.... What do you really own? 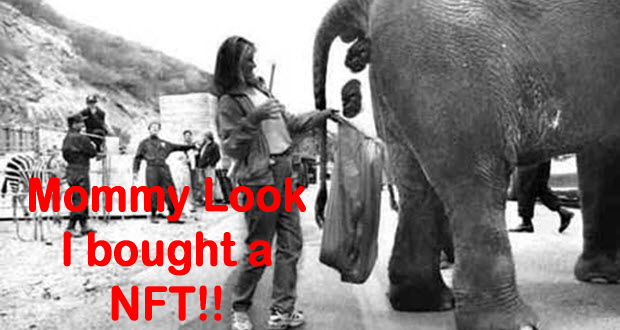 I would say really smart people are falling for this but they are not falling for it. They are leading the drive and people with social standing are driving the market convincing everyone else these apes have value. When these social influencers start dropping them and reaping the enormous profits the little guys that mortgaged everything are going to be left holding the bag on a whole lot of nothing.


[notify]DomainTrader[/notify] and I are seeing this all over twitter.


People cannot be this stupid, you know this has to fail in the end, just watch the Beanie Boo video above and learn a lesson.
Visit me: MapleDots.ca - Follow me: @MapleDots

There are 2 reasons to buy NFTs right now.

1) To reap profits later as more "big guns" join the market and help draw in the sheep to fleece.

2) To show how incredibly rich you are, like James Booth spending over a $million$ on an Ape.

That said, I do believe that like other collectibles, the early NFTs (like Punks) will continue to hold some value. I saw VISA bought one NFT for posterity, and what was it? A CryptoPunk.

But the core problem with digital collectibles is controlling supply - a few years down the road, there will be more NFTs than people on Earth and at some point it will all melt down into one big ugly ball.

I was initially very skeptical of this space. Not so much today after I bought an NFT (*not* a Bored Ape) on Friday night (with the goal of flipping it) and it sold Sunday morning for 2.5 times what I paid for it. Mind officially blown.

FWIW, this is the best book (of four) I have read so far on the subject of NFTs as investment assets:

This space is worth looking into if you are so inclined; it's an exciting space and it's very early days. You can start with a small investment, under $200 if you are 'minting' an asset to later resell. This Fall and next year, when the big brands start entering the space, it is going to be wild.
Bill Sweetman
Domain Buyer Broker
NAME NINJA
416-203-7033 | bill[at]nameninja.com | nameninja.com
D

MaiTaiMan said:
This space is worth looking into if you are so inclined; it's an exciting space and it's very early days. You can start with a small investment, under $200 if you are 'minting' an asset to later resell. This Fall and next year, when the big brands start entering the space, it is going to be wild.
Click to expand...

Of course it's worth looking into, as it's prime sheep shearing time! Just don't go native and start fooling yourself that is not a fad with a definite shelf date.

Don't be the last guy for a chair when the NFT music stops.

Today Visa just bought a CryptoPunk, they now own a NFT, from what I have been told is that Visa does not hold any Bitcoin/Etherium but they now own an NFT.

Most of the people that are really hyped about NFT's also state that probably over 90% will probably drop to Zero... and the few with ongoing utility or case use will hold strong.

I think right now the FOMO is crazy and just about anything will turn a profit, everyone and their dog, cat, dragon, llama, goat, aligator, elephant, rat, robot, alien are putting out NFTs trying to grab their piece of the pie.


I think the real niche for nft's is in gaming, owning your in game items, and have them minted on the block chain allowing you to buy/sell trade, level up etc will be huge. People are making $50 a day playing AxieInfinity, tha's a daily wage in some countries. there will be so many use cases in that niche... Get ready for "Ready Player One" ( that's a metaverse movie for non movie buffs lol )

So you figure Morgan made money right?

Nope, that is the trap, he took all the money and bought another ape, this will go on indefinitely until all the guys at the top lose the money. The only way Morgan would have won is if he would have stopped and pocketed the cash.


By the way, I am not coming down on apes, I like the opportunity, I even bought my first one.

& finally ended up getting the matching twitter handle @BoredApeNFT

It all depends, what was the rarity of the Ape he sold for $126,000? compared to the rarity of the one he purchased? Just like in domains I may sell a domain for $15,000 where another domainer with more connections, a stronger belief in the value of the domain and can also wait for the right buyer to come along and pay $250,000

keeping with the Domain comparison you often sell a domain and use that money to buy a rarer, more valuable name.

That is exactly what I said above with the elephant picture, you don't want to be the last guy holding these things when the prices start to fall.

I don't doubt people are making money but there is an infinite supply of NFT's, if the apes run out they will come out with a second edition or baby apes. The point being there is no ceiling ever, they just make more until so many people have bought them that the value plummets.

Accolades to everyone buying on the upswing, just know when to say enough and remember to pocket the cash. If you wait to long you will be the proud owner of a digital jpeg that will have little to no intrinsic value.

I am so confident this will happen that I am going to tag this post and get back to it when it does.
Visit me: MapleDots.ca - Follow me: @MapleDots

Crypto punks came out in 2017 and are more valuable than the bored apes I think.

I think we are seeing collectibles move online and this will be completely normal to those growing up in it. not to mention, you can tie outside values and perks to nfts beyond just owning the image. that said, a lot of them will end up being junk but there will also be winners. right now it seems lofty and I’d only get interested if there was a crash reset in prices, or I could identify something new and early at a low price. let’s face it, many in tech and crypto have made stupid money in recent years and this is one of the places it goes.
My Market Page dn.ca/market/domains

I had some in my cart but could not stomach the gas fees.... Hindsight 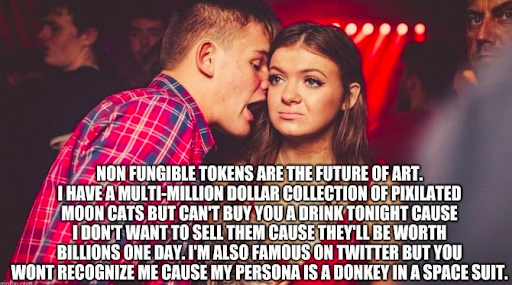 Why does that sound true?

Buy a Picasso or an Andy Warhol...they seem to be less volatile.
Candy is childhood, the best and bright moments you wish could have lasted forever. - Dylan Lauren

I think some of it is people have so much f'in money that they came into quickly with little work:money ratio that it's easy for them to throw $50 - $60k around like it's pocket change. ( in the crypto niche. )

Most NFT's are garbage, and will go to zero, some will evolve and hold, and some will build great communities of followers.
You must log in or register to reply here.

Tough to get Twitter followers in the domain game.