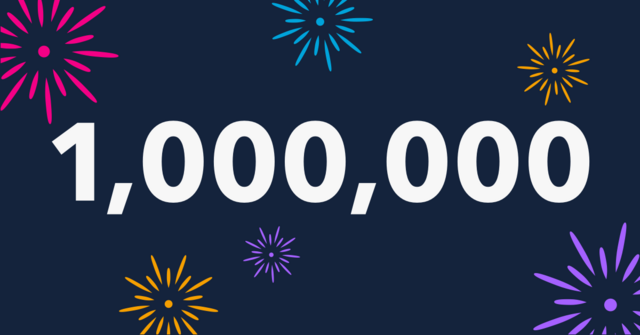 A question to all the members.


Is there a domain in your possession that you think could be the first million dollar .ca domain sale?

If so could you share the domain and the reasoning thereof?


I recently made a topic explaining why I consider one of my domains to be worth a million.
Not only did I say why I thought it was worth a million but I actually listed it at that.

You can see the domain at Pure.ca

PS. It is also the domain I get the most inquiries on, probably 2-3 per week and I pointed the domain to a million dollar lander to stop all the I am poor or a student inquiries.


What do you have that you think could carry a similar million dollar valuation?
Visit me: MapleDots.ca - Follow me: @MapleDots

I think anyone who has a generic 'one word' domain that might match a .com of a big worldwide corporation (today, or in the future as many good .com's are still not developed) would have a chance at a million dollar sale, especially if that company also operates in Canada. An example would be if someone still owned apple.ca, it would likely be very valuable to a certain tech company, but it's a generic word with a lot of potential uses. Side story, I think around when Twitter just started I was able to register twitter.ca but didn't because I didn't realize it was a dictionary word, for the life of me I don't know why. My recollection a bit fuzzy but I do think it was available. This is back in 2007, you could also get almost any Twitter username you wanted, it was still pretty small and I got ones like @toronto - kind of felt like a domain landrush but I only got a few because I thought it would attract too much attention, and you needed a separate email to get each username. Needless to say twitter usernames can be quite sought after these days.

One of the great things I've always thought about domains is that a word or term you register can always become very valuable in the future with some fateful turn of events.
My Market Page dn.ca/market/domains

Negotiations on pure just ended with the final offer at 219k

The offer was made by food company that is getting more and more into organics.

They said that was their last and final offer and I simply responded that it might be their final offer but is definitely is not THE final offer on pure.ca.

Like I said back in January, it is my most requested domain and will not change hands for under one million.
Visit me: MapleDots.ca - Follow me: @MapleDots

Definitely takes a lot to turn down a $219K offer but the name is obviously one of the better (if not the best) name that you own.

Dare to share how negotiations started and what was their original offer?

Nafti said:
Dare to share how negotiations started and what was their original offer?
Click to expand...

Here is how it went down...


2. I responded and said all inquiries start at contact.mapledots.ca


3. Offer came in at $1000 which is the minimum accepted per the contact form.


4. I ignored the offer and did not respond


5. Six days later the form came in again at same price with a note as to why I did not respond.


6. Again I ignored the offer


7. Received another email to sales@mapledots.ca telling me my form is broken because they did not get a response.


8. Again I ignored the email


9. Received an email from the ceo of the company asking me how they could proceed with getting the domain.


10. I responded that all contact starts with a reasonable offer via contact.mapledots.ca


12. I opened communications with the ceo via email telling him thank you for the offer but the domain has one of the highest values of any .ca domains because it has broad use and could be used in most any industry.


13. CEO asked how I would feel if he doubled the offer and I responded by saying they should consider adding a second word behind pure and using the funds to purchase it if it was taken.


14. CEO said what is your bottom line so I can discuss it with my team.


16. CEO said that is beyond their budget but he will go to 150k final offer


18. A few days later the ceo's secretary emailed asking me why I did not respond.


19. I told her the email said final offer and since it did not meet my expectations for the domain I had no need to respond.


21. I responded within 15 minutes thanking him for the offer but there are additional expenses for my portfolio to be considered so I politely declined.


22. His secretary responded by offering another 19k to cover incidental costs so that I had 200k in my pocket.


24. CEO responded he has spent enough time on this and I should take it or leave it.


25. I responded by asking him how much his company is worth and if I could offer him 1/6 of the value for it.


26. He responded with the word Touché and nothing else.


27. Two days later his secretary emailed and asked if negotiations had concluded and I responded with 1 sentence...


28. Please contact info@pure.ca when you are ready to reopen negations based upon the value of a brand.


29. ceo responded back this was the final offer


30. I responded back it might be their final offer but is definitely is not THE final offer on pure.ca.
Visit me: MapleDots.ca - Follow me: @MapleDots

I used the email address at pure to make him envious of how his companies email address could look. \m/
Visit me: MapleDots.ca - Follow me: @MapleDots

Absolutely. That must have been very hard to say.

Eby said:
Absolutely. That must have been very hard to say.
Click to expand...

Actually not, I truly think they did not fully understand the value of this domain as a brand.
Visit me: MapleDots.ca - Follow me: @MapleDots


MapleDots said:
I used the email address at pure to make him envious of how his companies email address could look. \m/
Click to expand...

Thank you for the very detailed process. I have a feeling that they will be back.
D

Nafti said:
Thank you for the very detailed process. I have a feeling that they will be back.
Click to expand...

Right now they have Oliver the Pencil-Necked Geek running a cost-benefit analysis on buying Pure.ca at various price levels.

I am not too worried, I am getting constant 25k hits on this domain, it is only a question of time before a larger company pulls the trigger and offers what it is worth. 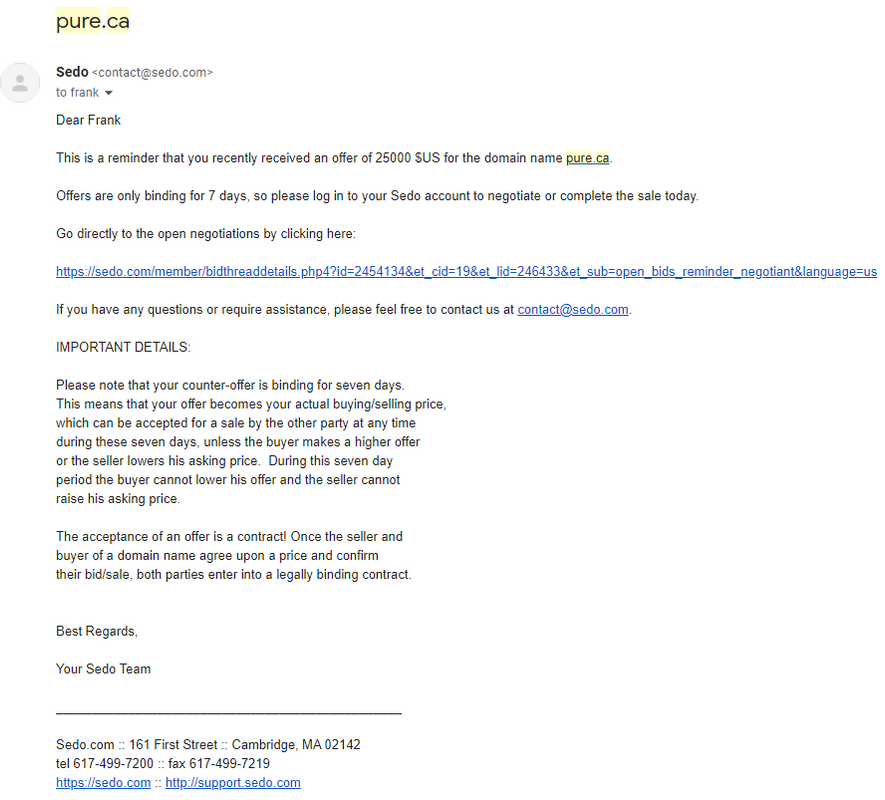 I'm guessing it gets the traffic for something like the TV show or cosmetics company?
Candy is childhood, the best and bright moments you wish could have lasted forever. - Dylan Lauren

I am assuming the offer at 219k is in Canadian dollars?

Maybe send him the link to the guy who bought Hush.ca and said he would have paid 10x what he did, lol. From one CEO to another.
My Market Page dn.ca/market/domains

The offer was in CAD

So far there seems to be no pattern, there are a number of different businesses that have bid on the domain.
That is exactly why it is one of my best domains, it has a vast appeal in many industries.
Visit me: MapleDots.ca - Follow me: @MapleDots

It's time to step our game up, and to stop selling premium domains for peanuts compared to what they're potentially worth. Canada is waking up.

Esdiel said:
It's time to step our game up, and to stop selling premium domains for peanuts compared to what they're potentially worth.
Click to expand...

90% of the truly premium domains are owned by domainers and if they stopped caving and giving them away the value would go up exponentially.

I picked up a truly premium domain not that long ago, have been hounding the owner for years with 1-2 emails annually. Eventually I got the email (like I always do) telling me I could have the domain for the amount I offered. They face renewal time and it gets too much for them and they have to sell for quick cash. What sells? The super premium of course.

That is why what [notify]dancarls[/notify] is doing is actually a good move. He is culling the heard and keeping only his babies. He will have no issues with renewals moving forward and he can wait until he gets the right amount for his cherry domains.

Others like me could care less about renewals, they are a straight business deduction and I can afford to hang on to my domains for a long time. I will not be selling my premiums for cheap.

That is the difference between a part time and full time domainer. If you set it up as a business and collect sales tax the renewals are totally deductible and should not become an issue.
Visit me: MapleDots.ca - Follow me: @MapleDots

MapleDots said:
90% of the truly premium domains are owned by domainers and if they stopped caving and giving them away the value would go up exponentially.
Click to expand...

It would probably help if the bigger sales were actually reported, the ones that are almost always under a sales agreement including an NDA. I've never thought about it really, but if you simply refused to sign any agreement that didn't allow the sale to be publicly reported, do you think they'd actually refuse to proceed with the purchase?

[notify]AdamDicker[/notify] - have you thought about asking Scotia for permission to release the sale price on MD?

domains said:
I think around when Twitter just started I was able to register twitter.ca but didn't because I didn't realize it was a dictionary word, for the life of me I don't know why.
Click to expand...

I remember on one of the forums, some guy offered to sell me twitter.ca - and I was like, wtf is a twitter and passed it up too...

That where its smart to stay abreast of the trends. This is where the young kids have an advantage...

domains said:
I think anyone who has a generic 'one word' domain that might match a .com of a big worldwide corporation
Click to expand...

Or possibly a Canadian only corporation that will never get the .com due to another company already using it.
You must log in or register to reply here.

Escrow.com sees Domains as the REAL Land of the Metaverse

Outbounding - How much is too much to ask?

My 5 Year journey to acquire a domain name

.CA or .com, which TLD is better for your website