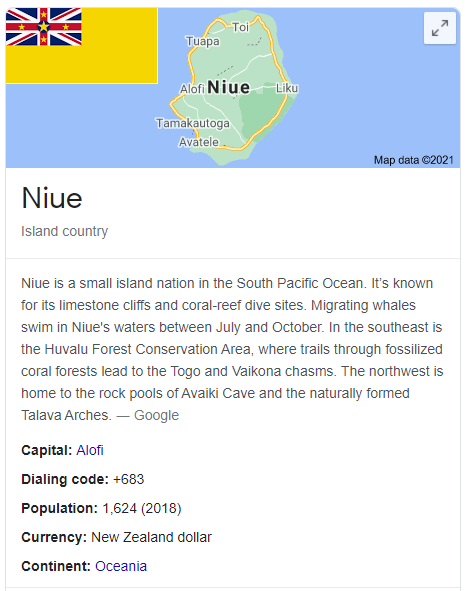 The Pacific island nation of Niue is loudly demanding that ICANN hand over control of its ccTLD, .nu, after two decades of bitter argument.


The government has taken the highly unusual move of filing a redelegation request with ICANN’s IANA unit publicly, forwarding it to other governments and the media.

The request is backed by UNR, the former Uniregistry, which is being put forward as the proposed back-end provider.

Niue claims, as it has since at least 2000, that the string was misappropriated by an American entrepreneur in the 1990s and has been used to generate tens of millions of dollars in revenue, with almost no benefit to the country.

The word “nu” is Swedish for “now”. It’s also the masculine form of “naked” in French, which enables lazy reporters to write click-baity headlines.
Click to expand...


I thought this article was important to post because it shows why countries should have control of their ccTLD's. They are not giving out new ones so the countries that did not think their ccTLD was important are now starting to regret the decision of letting other people manage their countries online identity.


Kind of makes you glad for CIRA, does it not?
So much so that some other countries are starting to trust CIRA to run their ccTLD's
Visit me: MapleDots.ca - Follow me: @MapleDots

I remember reading this extension was popular with the Swedes.
My Market Page dn.ca/market/domains
You must log in or register to reply here.

Data breaches at Canadian organizations have nearly doubled since the pandemic

CIRA introduces an iconic Canadian symbol as the new face of .CA domains

CIRA encourages small businesses to own their digital presence